*Source: Bonds represented by the Bloomberg Barclays US Aggregate Bond TR USD. This chart is for illustrative purposes only and does not represent the performance of any specific security. Past performance cannot guarantee future results

S&P 500 Flirts With Its February Highs

The four major U.S. stock market indices all gained on the week, although the advances were not quite as robust as the week before. In a bit of a reversal, the narrowly-focused DJIA outpaced the other indices and NASDAQ brought up the rear. The week was marked with almost all of the S&P 500 companies reporting earnings and generally speaking, the results were not as awful as predicted, but they were still pretty awful given the impact of COVID.

As earnings season wrapped up, attention turned to economic data and as expected, the news was generally positive if not more positive than expected. Retail sales were up to almost pre-pandemic levels, housing remains strong and first-time unemployment claims came in below 1 million for the first time in 21 weeks. 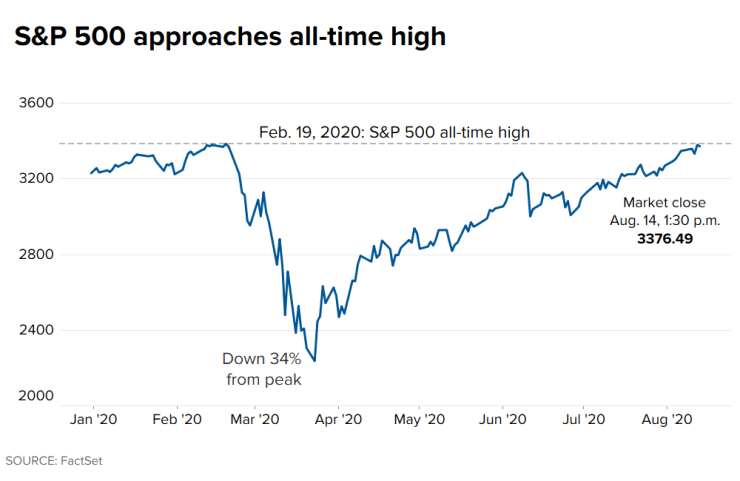 The big news for the week was the S&P 500 moving within 0.2% of its February all-time high. With another good week, that milestone is likely to fall. For the second week in a row, the value names outpaced the growth names, causing some to wonder if a market rotation was underway.

On Wednesday, the Department of Labor released Consumer Price Index data and it was a tad worrisome. The CPI for July generally surprised on the upside, causing some to worry about higher inflation as both the headline and core CPI readings advanced 0.6% over the month, the largest one month increase since the early 90s.

“The Consumer Price Index for All Urban Consumers (CPI-U) increased 0.6 percent in July on a seasonally adjusted basis, the same increase as in June, the U.S. Bureau of Labor Statistics reported today. Over the last 12 months, the all items index increased 1.0 percent before seasonal adjustment.

The gasoline index continued to rise in July after increasing sharply in June and accounted for about one quarter of the monthly increase in the seasonally adjusted all items index. The energy index increased 2.5 percent in July as the gasoline index rose 5.6 percent. This was partially offset by the food index, which decreased 0.4 percent in July, with the index for food at home declining 1.1 percent.”

The DOL also reported first time unemployment claims and for the first time in 21 weeks, the number was below 1 million. From the DOL: 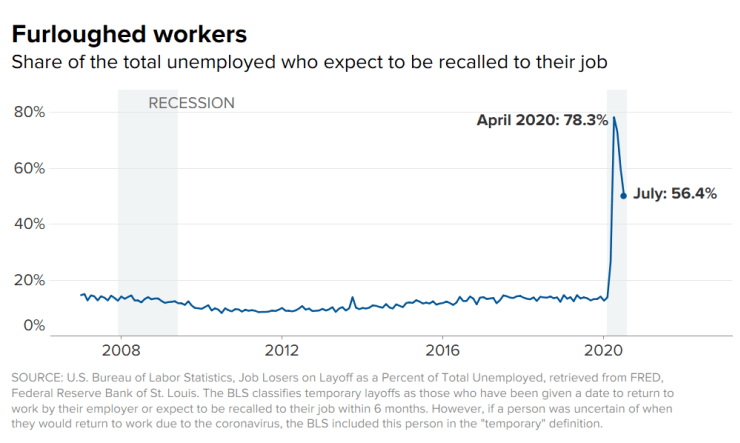 “Advance estimates of U.S. retail and food services sales for July 2020, adjusted for seasonal variation and holiday and trading-day differences, but not for price changes, were $536.0 billion, an increase of 1.2 percent from the previous month, and 2.7 percent above July 2019.